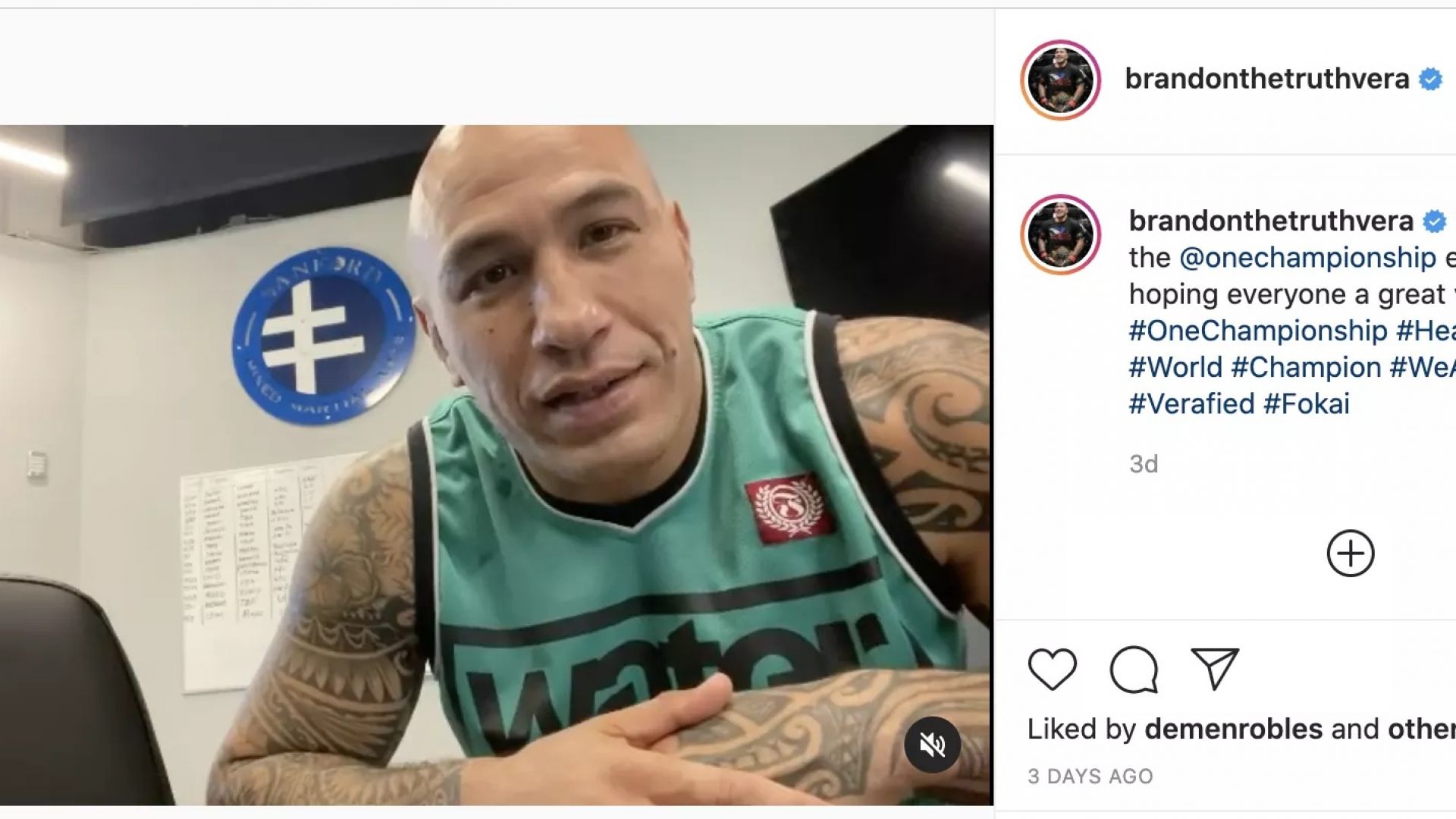 Heavyweight contender Amir Aliakbari has been calling out reigning ONE Heavyweight World Champion Brandon “The Truth” Vera since signing with ONE Championship in 2020. The former suffered a knockout loss in the recently concluded ONE: FISTS OF FURY II.

Despite his loss, Vera commended all heavyweight athletes in the card saying everyone put out a good performance. To Amir Aliakbari, The Truth had this to say: “I hope you rest well, speedy recovery, and get ready for the next one.”

“Don’t worry about everyone. You can worry about that person standing right in front of you, especially when they close that door on the Circle,” Vera advised.

Reigning ONE Heavyweight World Champion Brandon “The Truth” Vera is deep in training, preparing for his upcoming world title defense, but had enough time to spare to catch ONE Championship’s latest blockbuster event last Friday night, ONE: FISTS OF FURY II.

The event was headlined by a pair of intriguing heavyweight bouts involving potential opponents for Vera. One man in particular, Greco-Roman Wrestling World Champion Amir Aliakbari of Iran, has been vehemently calling out Vera since he signed with ONE Championship in 2020.

Aliakbari, however, suffered an embarrassing one-punch knockout loss to South Korean finisher “Mighty Warrior” Kang Ji Won in his highly-anticipated ONE Championship debut. Vera shared his reaction to the event on his official Instagram account, including a few words for rival Aliakbari.

“I wanted to give a shout out to all the heavyweights on the card, everyone on the card actually, did a great job. I know me and Amir have got this little thing going back and forth. I hope you rest well, speedy recovery, get ready for the next one,” said Vera.

“Like I’ve been telling everybody all along man, it’s different here in Asia, it’s different in ONE Championship. Don’t worry about everyone. You can worry about that person standing right in front of you, especially when they close that door on our Circle.”

Vera has an immediate threat in front of him in the form of former UFC star Arjan Singh Bhullar, so the Filipino-American is understandably focused on that matchup. “The Truth” is currently in Florida training at the renowned Sanford MMA under Henri Hooft, alongside former opponent ONE Light Heavyweight World Champion “The Burmese Python” Aung La N Sang, and former two-division ONE World Champion Martin “The Situ-Asian” Nguyen, among others.

Vera is expected to return to action very soon, as the bout with Bhullar looms.

The loss for Aliakbari may have set him back a bit in the heavyweight pecking order. However, the Iranian star is scheduled to make a quick return to action against undefeated Russian powerhouse Anatoly “Spartak” Malykhin at the “ONE on TNT” event series.

Meanwhile, ONE Championship returns with ONE: FISTS OF FURY III, the third and final installment in the “Fists of Fury” event series.