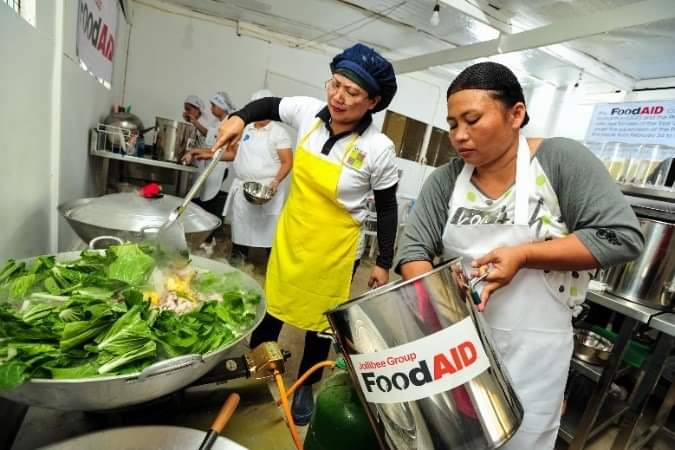 In Ibaan, Batangas, an unassuming kitchen for Taal’s displaced families shows why it takes a village to rise from the ashes.

On January 12, the province of Batangas was rocked by the Taal Volcano’s sudden explosion, which sent over 38,000 families to various evacuation sites in safer areas. The disaster triggered a flurry of aid coming from different sectors, groups and individuals from all over the Philippines. For its part, Jollibee Group Foundation (JGF) mobilized its FoodAid response, providing hot meals to more than 17,000 individuals and food packs to sustain over 2,600 families.

While Taal’s activity has since consistently weaned, and most of the province has gone back to normal, an interim shelter still stands in Barangay Talaibon, Ibaan, Batangas. It houses around 500 families who are unable to return to their homes located within Taal Volcano’s permanent danger zone.

At the heart of the shelter’s operations, the FoodAID Community Kitchen set up by JGF, the Provincial Local Government Unit of Batangas and its Provincial Social Welfare and Development Office, provides much-needed sustenance to the residents. Powered by volunteers from the displaced families, and supported by the Anihan Technical School and Bangko Kabayan, the community kitchen churns out fresh, hot meals twice a day for these families. This initiative was also made possible, in part, by donations of customers received through the coinbanks located in Jollibee, Greenwich, Chowking, Red Ribbon, Burger King, Mang Inasal, Highlands Coffee, PHO24 and Panda Express stores across the country, as well as in MerryMart Grocery and Islas Pilipinas.

The FoodAID Kitchen is driven by JGF’s sustainable approach to its advocacies and programs. In the context of disaster, it is a response to the challenge of ensuring that internally displaced families have continuing access to sufficient and nourishing food even after the relief goods stop coming.

At the Ibaan temporary shelter, construction of the kitchen started on February 10, followed by fitting of equipment for high-volume production cooking. On February 24, the kitchen began its dry run phase, providing meals to residents according to a 30-day menu cycle developed by JGF. It will be turned over to the provincial government of Batangas within March. In preparation for the eventual turnover, volunteer family members and kitchen supervisors from the PSWDO are being trained on food safety and kitchen operation process flow. They also get hands-on experience through the dry run activities.

This initiative is inspired by JGF’s Busog, Lusog, Talino (BLT) School Feeding Kitchens, a partnership program in support of the Department of Education’s School-Based Feeding Program that aims to keep children in school by regularly providing them with nutritious meals. The meals are prepared by volunteer parents in kitchens set up by JGF and managed by the school community and partner local government units.

The FoodAID Community Kitchen is built for high-volume food production at a Batangas temporary shelter. Volunteers learn food safety and kitchen operation in preparation for the kitchen turnover to the local government. 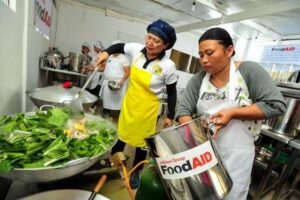 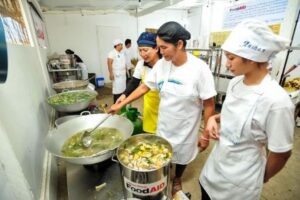 Cooking area before the FoodAID Community Kitchen was constructed