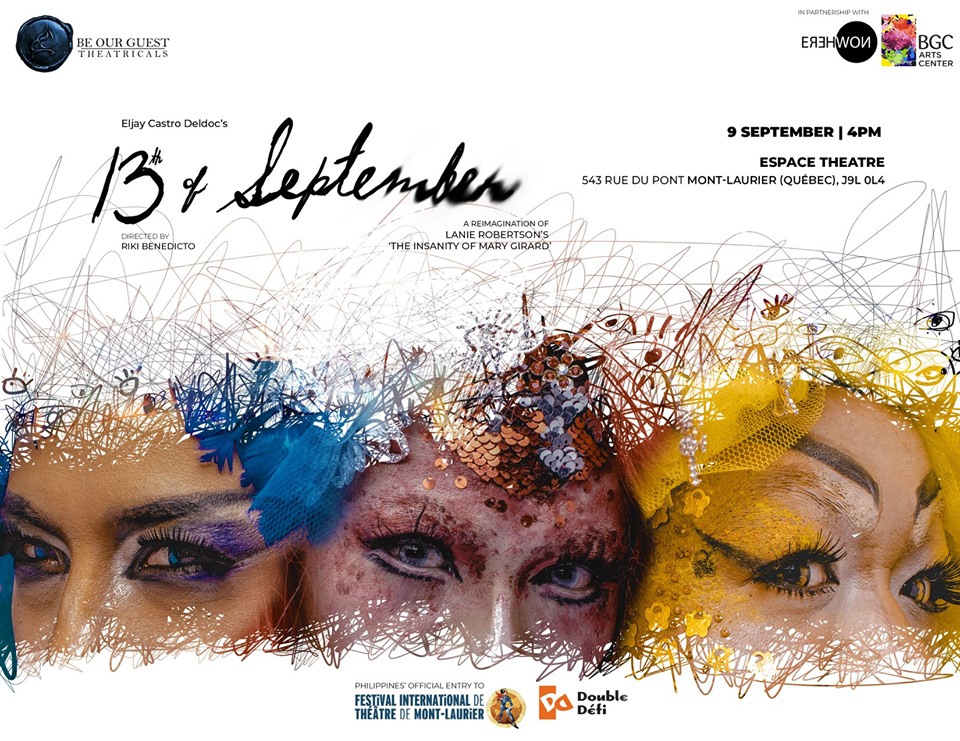 Share Tweet
“13th of SEPTEMBER”
BY BE OUR GUEST THEATRICALS
DIRECTED BY RIKI BENEDICTO
SEPTEMBER 9 – 4 PM
ESPACE THEATRE
543 RUE DU PONT LOCAL
QUEBEC, CANADA
— “13th of September” – the Philippine’s official entry to the 9th Festival International de Theatre De Mont-Laurier  is all set for its international gala performance on September 9 – Monday 4 pm at the Espace Theatre at 543 Rue du Pont Local, Quebec, Canada.
Produced by Be Our Guest Theatricals, “13th of September – A Reimagination of Lanie Robertson’s “The Insanity of Mary Girard” was adapted by playwright Eljay Castro Deldoc and directed by Riki Benedicto.
The 9th Festival International de Theatre De Mont-Laurier is a biennial theater festival which will be held from September 5 – 11 with a total of only 25 companies from 19 countries as participants. The Philippines is the only country from Southeast Asia who was selected to join the festival since its launch in 2003.
The complete list of countries are as follows: Algeria, Argentina, Bangladesh, Belgium, Canada, Colombia, Dominican Republic, Egypt, France, Italy, Morocco, Mexico, Philippines, Poland, Romania, and Syria.
SYNOPSIS
Sunday Evening, Mary Girard is preparing for her last night in Pennsylvania Asylum. Now, 56, her age is visible after more than two decades re-living the moments of her life inside the asylum. While doing her daily routine and preparation with other patients, her past is dawning inside her, the memories of her mother, husband and her dear daughter are right in front of her and it seems like she’s “sane” once again. As for her last night with the tranquilizing chair, she will fight and re-live the moments of lies and betrayal that has never been proven.
ADORE DOMINGUEZ, MARCO EDWARD CALILAO and PAOLO ‘LAO’ RODRIGUEZ are the cast of the play.
Director Riki Benedicto is, once again, putting forward another universal concern in Eljay Castro Deldoc’s “13th of September” where he aspires to “challenge society’s restrictive definition of sanity, gender and sexuality or even your perception of truth – truth is relative.”
The artistic and production team of “13th of September” are as follows: Riki Benedicto (Director), Eljay Castro Deldoc (Playwright), Drew Espenocilla (Dramaturg/English translation), Jay Lorenz Conanan (Production/Costume Designer), Katreen Dela Cruz (Stage Manager), Roldan Lozano (Lights Designer), Ces Valera (Projection Artist), Paw Castillo (Photo and Graphic Artist), and Jared Acuna (Video Artist).
Be Our Guest Theatricals is a team of professional theater and film practitioners based in Manila, Philippines. The group’s major goal is to create and produce shows for different international theater festivals and this year, a door was opened to them to start achieving it. They want to boost the presence of the Philippine theater in the international realm and at the same time, bring home and share their learnings to Filipino professional and school-based theater companies.
A series of five performances of “13th of SEPTEMBER” were presented at Erehwon Performing Arts Theater (Quezon City) and at the Zobel de Ayala Recital Hall, Maybank Performing Arts Theater (Taguig City) prior to the group’s departure for Canada.
For ticket inquiries, please call: 1(819)623-1222 ext. 1.
www.espacetheatre.com; http://festival.doubledefi.org
For further details, please check our social media:
Facebook (Be Our Guest Theatricals). #sep13mberPHL #sep13mberCAN
Go for the world !
Go for Quebec, Canada !
Good luck guys !!!!!
- Advertisement (300x250) -