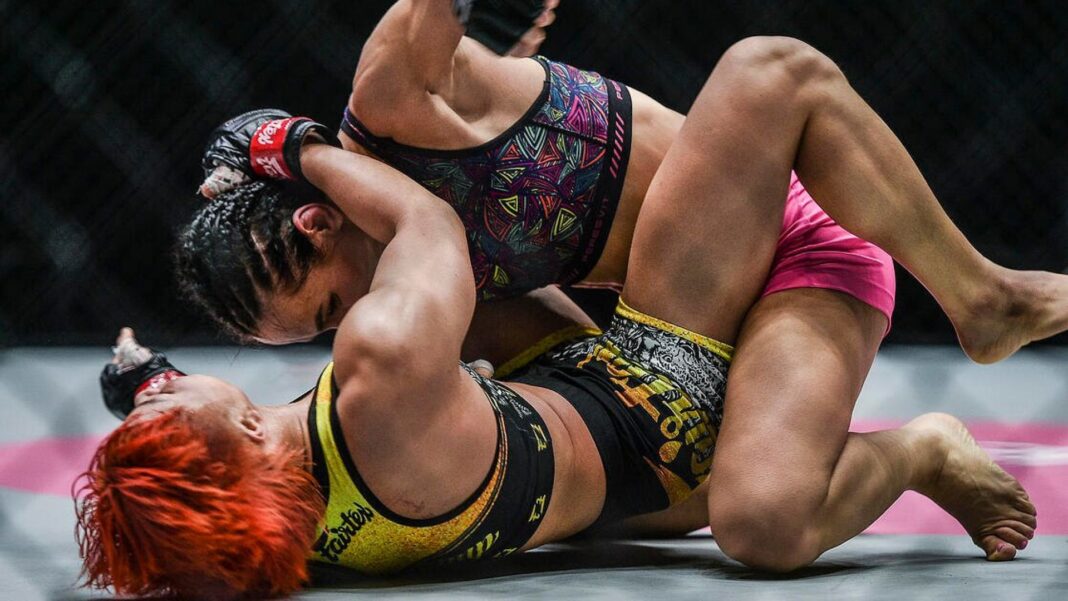 Denice Zamboanga and Wondergirl Fairtex remain close friends even after their time as training partners in Thailand. Zamboanga is excited to watch Wondergirl’s bout against Fil-Am striker Jackie Buntan, and is confident that her friend will emerge victorious.

Fans can catch the Muay Thai showdown on Friday, February 26, 2021 at ONE: Fists of Fury.

First-ranked ONE women’s atomweight mixed martial arts contender Denice “The Menace” Zamboanga of the Philippines will be watching intently as the promotion rolls out with their ONE: FISTS OF FURY card next week.

One of the bouts on the event include a ONE Super Series Muay Thai showdown between Nat “Wondergirl Fairtex” Jaroonsak of Thailand and Filipina-American Jackie Buntan. ONE: FISTS OF FURY is scheduled to air live from the Singapore Indoor Stadium in Singapore on Friday, 26 February.

Zamboanga previously trained together with Wondergirl at the Fairtex Training Center in Pattaya, forming a close bond as teammates and as friends.

“I’m super excited for this fight. I always enjoy Nat fighting, she’s such an exciting fighter. I will always support her,” said Zamboanga.

“We are very close friends. We used to be roommates back then. We would always share love and food stories, good fun times. She’s my food buddy and Thai teacher, I love her. I miss spending time with her and Stamp [Fairtex].”

Wondergirl is one of the fastest rising stars in ONE Championship. She is a two-time Thailand Muay Thai Champion. After joining ONE Super Series in mid-2020, Wondergirl racked up two impressive finishes inside the Circle.

Having been former training partners with Wondergirl, Zamboanga is witness to the Thai fighter’s work ethic. While she believes the fight with Buntan will be a competitive one, Zamboanga knows who she’s picking to win.

“She (Wondergirl) is a very strong and very dedicated fighter. Her work ethic is exemplary. She always comes into camp motivated. As a fighter, she’s long and athletic, and packs a lot of power,” said Zamboanga.

“I have to go with Wondergirl in this one. I know she’s constantly improving every aspect of her game in every camp. I know her hard work and dedication. Her opponent seems to be also very good, so let’s just see what happens in this fight. It’s going to be a good one. I can’t wait!”

Now that they are no longer teammates, Zamboanga and Wondergirl haven’t had much time to spend together. But the 24-year-old Filipina says she will always be in her Thai friend’s corner.

“I will always support her in and out of the ring. That will never change,” said Zamboanga.