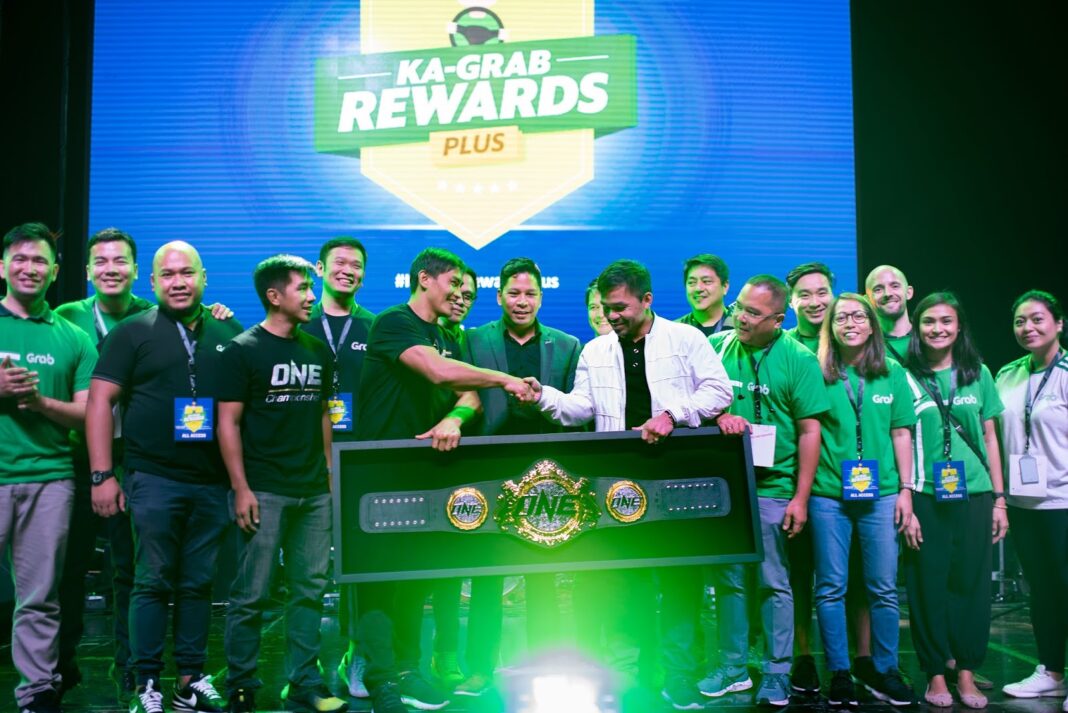 Share Tweet
Grab Philippines celebrated National Heroes Day last Monday, 26 August by inviting Grab drivers and their families for a day of fun in an event that celebrated Grab’s Everyday Heroes on the road.
In attendance were members of Grab Philippines community, ONE Championship senior executive Victor Cui, and team Lakay athletes Eduard Folayang, Geje Eustaquio, ONE Strawweight World Champion Joshua Pacio, and Team Lakay head coach Mark Sangiao. Also in attendance as a special guest was Filipino sports icon and national hero, Manny “Pacman” Pacquiao.
The event at the Mall of Asia Arena in Manila drew a huge crowd with entertainment and raffles. There were even performances by music and dance acts Shanti Dope, Rocksteddy, and the SexBomb girls.
Fans and Grab drivers who all came out to see Pacquiao, as well as members of the famed Team Lakay of Baguio City, were treated to a world-class evening program.
Pacquiao is a winner of multiple boxing world titles across eight different weight divisions. He is the only man in the history of the sport to achieve such a feat. But he, for the most part, has stayed within the sport of boxing for the majority of his career.
Aside from occasionally dabbling in professional pool, Philippine basketball, acting, and even singing, “Pacman” has remained a boxer. He has, however, dipped his influence in the sport of mixed martial arts — at least, on the business end.
Pacquiao, who has worked closely with Asia-based martial arts organization ONE Championship in the past, was presented with a token of appreciation, by ONE and ride-hailing company Grab Philippines.
A beautifully-framed ONE Championship world title belt was presented to Senator Pacquiao as a commemorative token for being a national hero.
“Manny [Pacquiao] is such an inspiration to us all. On behalf of Team Lakay, I’d like to thank ONE Championship and Grab Philippines for allowing us to be a part of this event,” said Sangiao.
“Witnessing his career and how he has overcome countless obstacles and constantly defied the odds, Manny motivates us to be the best we can be. He’s a hero for us all. I’m sure everyone at the event was happy to see him there.”
Pacquiao also took the time to make a sizable donation to the Jinkee and Manny Heart Foundation, which gives free heart care for children in the Philippines. The Philippine senator donated 1,000 PHP for every grab driver in attendance, which ended up totaling 1-million PHP overall.
“Not only is he a sports icon, but Manny is also a terrific human being, and an amazing public servant who truly cares for the Filipino people,” said Folayang.
“With what he’s given back to the people, even taking money out of his own pocket to help the poor and underprivileged, it’s more than admirable. It’s inspiring, and it’s motivating. Everyone is in good spirits right now. It was such an honor to even be in the same room as Manny. He’s an absolute legend in every sense,” Folayang added.
ONE Championship and Grab have executed strong partnership activations since the beginning of the year, working on various initiatives in the country, as well as in Southeast Asia. The two companies look to continue that strategic partnership for the remainder of 2019 and beyond.
- Advertisement -