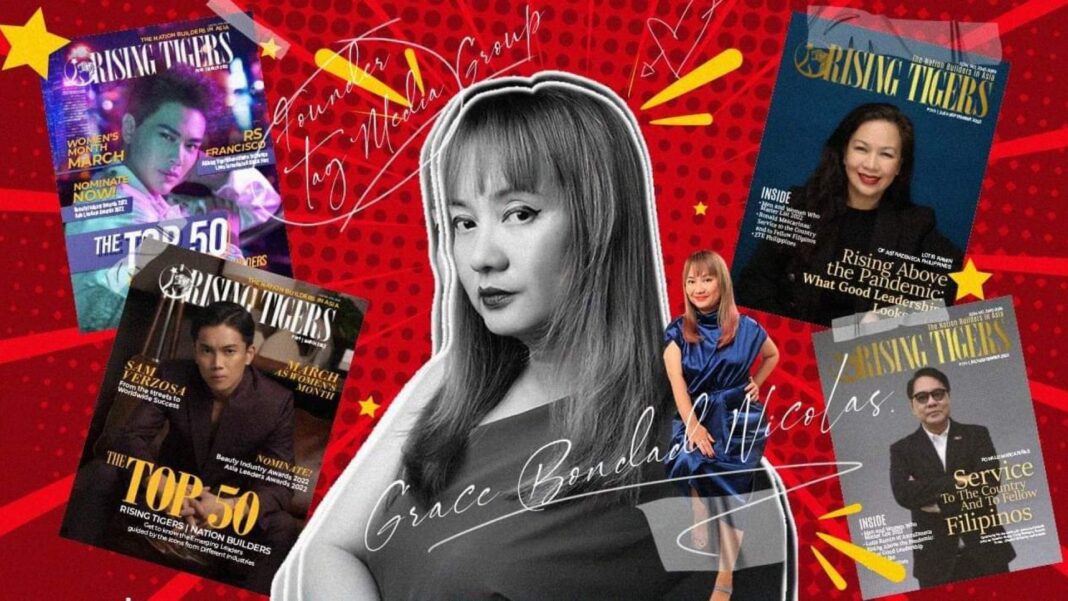 Grace Bondad Nicolas—the woman behind successful shows, an indefatigable civic and multiplatform leader, and adviser to billionaires—breaks her own record as Rising Tigers Magazine publisher and managing director.

In less than year, she is already concocting her biggest and grandest event yet by feting the movers and shakers of public service and industries with Rising Tigers Magazine’s Grand September Ball, to be held in no less than the country’s historic The Manila Hotel.

“We tried to innovate. All our activities under TAG Media Group whether it’s the concert, shows and our clients projects, we keep on doing everything differently from the rest. We did launch the coffee table book last year and launched it inside the Singapore Embassy and now the magazine. We’re super grateful in all that’s happening. All because also of our creative team,” Grace said.

Simply put, there is no stopping her.

Grace is all about breaking the glass ceiling and celebrating gratitude. She continues to make history in everything she touched.

Setting her visions high and achieving them

Like the legendary King Midas, who turned everything he touched into gold, the Grand Ball glitters with gold and black as its color palette.

Would you believe that Rising Tigers Magazine is just her second publication? Last year, Grace with her TAG Media Team launched Asia Leaders Award’s Profiles of Excellence coffee-table book at the Singapore Embassy in Manila.

This year, not even a year into Rising Tigers Magazine’s release, the only business and lifestyle glossy magazine to come out of the pandemic is already National Book Store’s most widely distributed periodical on its rack!

Every time an issue of the magazine launches, industry leaders and government leaders are swept in waves of grandiose festivity. Who can beat that?

Grace is after all the Queen of Events herself! We cannot expect less, definitely not.

She is not only the brains and beauty behind the Asia Leaders Awards, she’s also the brains behind TAG Media Group—composed of TAG Media and Public Relations, AG Builders and Developers, and AAA Cosmetics and Trading Company—the fantastic team behind Rising Tigers Magazine and her ultra-successful productions.

Making waves outside of the events circuit

Truly, multimedia celebrity and serial entrepreneur, Grace Bondad Nicolas, is a bombshell inspired to achieve everything she could every day for family, businesses, and community.

She is concurrently the first woman President of the American Association of the Philippines (AAP), Lieutenant Governor Designate of Division 3A (Metro Manila) of the Kiwanis Philippine Luzon District, Vice President of the Makati Tourism Foundation, and Vice President for External Affairs of the Los Baños Chamber of Commerce & Industries (LBCCI).

As if these positions aren’t enough to challenge her brains and brawn, she is also Certified Mentor of Go Negosyo. She shares first-hand business experiences which according to her was all because of the training from her parents.

Always inspired, indefatigable Grace is also the COO of eco-tourism destination Hidden Hills Farm by Josefino, named after her father who was also her inspiration and mentor.

Grace holds both a BS in Industrial Engineering and an MM in Engineering Management from Colegio de San Juan de Letran and writes business articles for The Manila Times and regional newspapers in Region 4A.

Rising Tigers Ball is just one of the events for the magazine to highlight the leaders.

Next for this November 22, 2022, is another awards event under TAG Media Group, the Asia Leaders Awards.