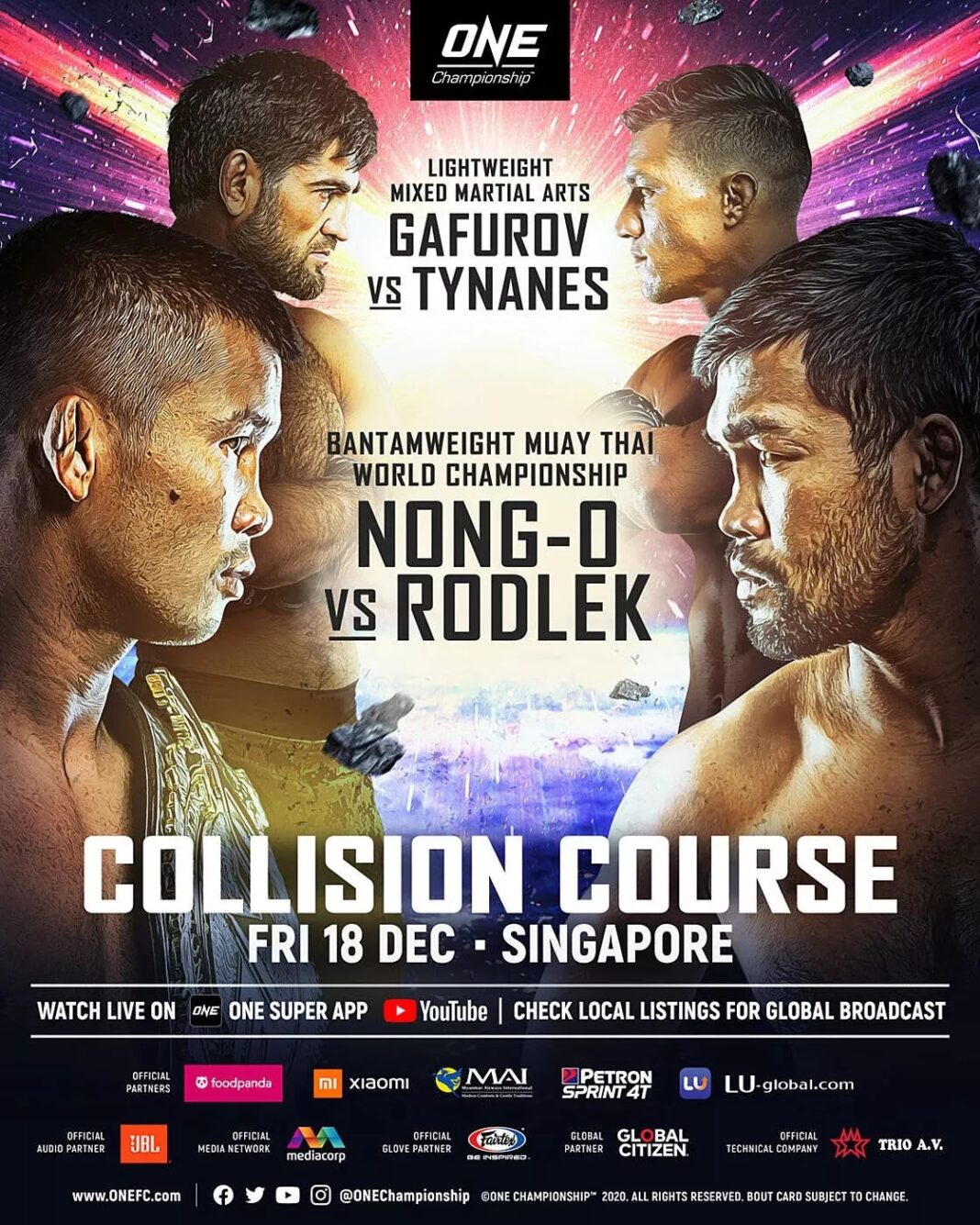 Team Lakay’s Danny “The King” Kingad will be back inside the ONE Circle and will face Kairat “The Kazakh” Akhmetov of Kazakhstan. Jomary “The Zamboanginian Fighter” Torres, on the other hand, will go against rising star Ritu “The Indian Tigress” Phogat. Both matches will be featured at ONE: Big Bang.

ONE Light Heavyweight Kickboxing World Champion Roman Kryklia will defend his World Title against Murat Aygun in the main event of ONE: BIG BANG on 4 December

ONE Bantamweight Muay Thai World Champion Nong-O Gaiyanghadao will put his World Title on the line against Rodlek PK.Saenchai Muaythaigym in the main event of ONE: COLLISION COURSE on 18 December

Each event will include limited 250 in-person ‘Superfan’ ticket packages, on sale today

23 November 2020 – Singapore: The largest global sports media property in Asian history, ONE Championship™ (ONE), today announced ONE: BIG BANG on 4 December and ONE: COLLISION COURSE on 18 December. The two events will be broadcast live from Singapore Indoor Stadium.

Both events continue ONE Championship’s partnership with the Singapore government to pilot the return of live international sports productions, and will continue to offer 250 special in-person “Superfan” ticket packages priced at $188 SGD each, which come with premium socially distanced seating and exclusive ONE merchandise worth over $80 SGD (total value at more than $268 SGD). Patrons are required to undergo the Antigen Rapid Test (ART) on event day and produce a valid negative ART certificate to qualify for admission. This exclusive limited offering can be purchased now until tickets sell out at Ticketmaster.sg.

ONE: BIG BANG
4 December 2020
LIVE from the Singapore Indoor Stadium

Reigning ONE Light Heavyweight Kickboxing World Champion Roman Kryklia of the Ukraine defends his World Title against Murat “The Butcher” Aygun of Turkey and the Netherlands.

ONE: COLLISION COURSE
18 December 2020
LIVE from the Singapore Indoor Stadium

Former ONE Featherweight World Champion Marat “Cobra” Gafurov of Russia welcomes undefeated lightweight Lowen Tynanes of the United States back to the ONE Circle.

All the action can be enjoyed on ONE Championship’s official ONE Super App, ONE’s social media channels, locally in Singapore on MediaCorp’s Channel 5 and meWATCH app, as well as globally across ONE Championship’s broadcast and digital media partners’ properties.

ONE hosts the biggest sports entertainment events across Asia, featuring some of the world’s best martial artists and world champions on the largest global media broadcast in Asia. ONE Esports, a subsidiary of ONE Championship, runs Asia’s largest global esports Championship Series with some of the biggest blockbuster game titles in the world. With a focus on both martial arts and esports, ONE

Championship is currently the largest producer of millennial live sports content in Asia. 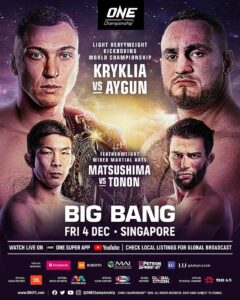