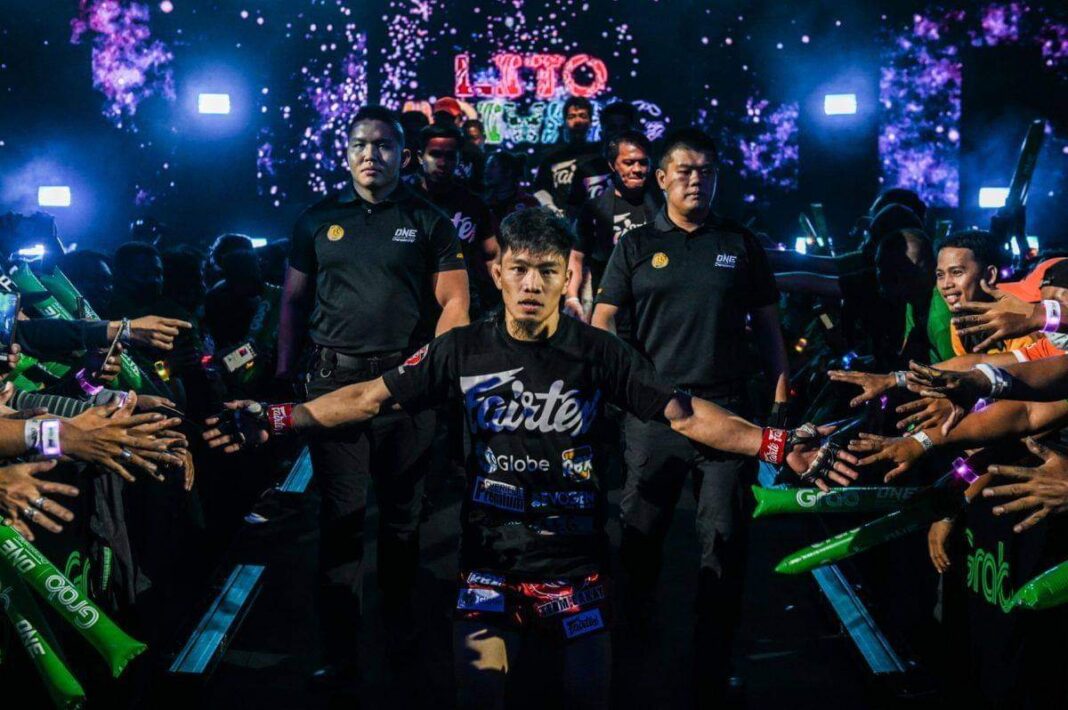 The highly-anticipated ONE: A NEW BREED II pre-recorded broadcast is set to air this Friday night, 11 September, and there is a host of compelling martial arts matchups on hand to be excited about.

One person who will be watching the show closely, especially the dramatic main event between 4-time Muay Thai World Champion Pongsiri PK.Saenchaimuaythaigym of Thailand and WBC Super Lightweight Champion Sean “Clubber” Clancy of Ireland, is our very own Lito Adiwang.

More fondly known as “Thunder Kid,” Adiwang is currently at home in Baguio City with the rest of his Team Lakay teammates. Ahead of this Friday night’s martial arts blockbuster, Adiwang offers his take on the spectacular main event, and how he thinks the action will go down.

“It’s champion versus champion in the main event. Sean Clancy is a technical fighter from Ireland who went to Thailand to train and fight there and eventually become a champion. He’s even faced some legends of the sport like Saenchai. That’s how talented and good he is,” said Adiwang.

“But in this fight, I have to go for Pongsiri. I believe Pongsiri will bring everything he’s got into this fight. For me, he has the edge in experience and his fighting style is aggressive. He’s a pressure fighter who loves to come forward. I see him winning the fight by attacking with powerful striking combinations, putting the pressure on Clancy until he breaks him down. I do wish them both the best of luck.”

Adiwang is no stranger to the world of striking martial arts. After all, he is a 2-time former Philippine National Wushu Champion. Building his reputation by joining Rich Franklin’s ONE Warrior Series and wreaking havoc on the opposition.

He is currently riding a seven-bout winning streak, with only one of those victories reaching the final bell. True to his nickname, Adiwang has taken ONE Championship’s strawweight division by storm.

ONE Championship allows its athletes to cross-compete between striking disciplines and MMA. The most notable transition has been that of former 2-sport ONE World Champion Stamp Fairtex, who has competed in Muay Thai, kickboxing, and mixed martial arts. Another notable name is France’s Fabio Pinca, who recently made his mixed martial arts debut.

When asked if he would one day consider competing in ONE Super Series since he is such a huge fan, Adiwang responded positively.

“The thought has crossed my mind. That’s definitely something that I plan for the future. I love fighting and striking, and I can see myself being successful if I make that transition. Of course, there’s a perfect time for everything, and if that time comes, I would love to compete in ONE Super Series. Right now though, I need to focus on my MMA career and prove myself in my division. I want to become an MMA world champion,” said Adiwang.

“ONE Super Series is the premier striking league in the world. The fact that ONE is signing the best of the best, legends of the striking martial arts, fans can see champion versus champion fights here. But even though ONE Super Series has a lot of champions and legends, they also give equal opportunity and chances to contenders who are fighting for their dreams and trying to climb to the top.”

ONE: A NEW BREED II was a closed-door, audience-free event previously recorded from Bangkok, Thailand.