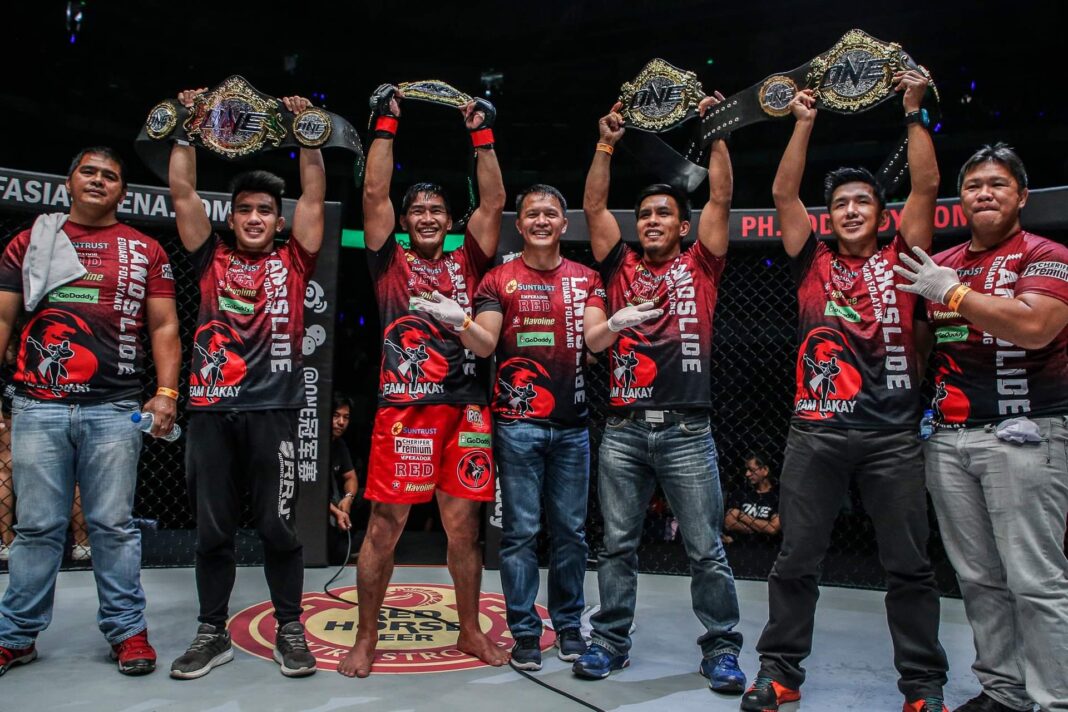 Philippine martial arts pioneer Mark Sangiao isn’t just the head coach and founder of the famed Team Lakay of Baguio City, Philippines. He’s also the team’s spiritual leader, a father-figure to many of its younger members, and a guide through the often convoluted world of mixed martial arts.

Known as one of the most prolific martial arts outfits in Asia, Team Lakay is home to many great athletes and World Champions, many of whom trust Sangiao with their lives. So it certainly comes as no surprise that Sangiao has a pretty good idea of what could be next for some of his most prized pupils.

The 41-year-old veteran recently shared his thoughts on potential matchups for his wards in ONE Championship. Here’s what he had to say.

Former ONE Lightweight World Champion Eduard Folayang is a man on the comeback trail. After a dismal 2019, wherein he dropped two out of three, the 36-year-old veteran is on the quest for gold.

The reigning ONE Lightweight World Champion, 22-year-old Christian Lee is the most wanted man in the division. Sangiao likes the odds for Folayang against the young titleholder, should they meet in the Circle.

“The lightweight division is one of the deepest in ONE Championship. There are so many great talents, and anybody can beat anybody on any given day. But Eduard Folayang is the best of the best. He’s the former champion and he’s so hungry to get that belt back. I’ve never seen him work harder in his career than now,” said Sangiao.

“There are a lot of great matchups to be made at lightweight for Eduard, but the one man he wants most is Christian Lee. Eduard is out for redemption, and he’s training very hard to achieve his goals.”

Where Folayang is right now in the pecking order at lightweight is debatable. He currently sits outside of the top five in ONE’s official athlete rankings. Folayang may need a win over a big-name opponent to position himself for a shot at “The Warrior.”

Another world champion on the hunt for redemption is former ONE Bantamweight World Champion Kevin Belingon. Belingon is a ferocious beast in the Circle, favored to decimate any man unlucky enough to get stuck in there with him.

Reigning bantamweight king Bibiano Fernandes, however, remains the only man capable of taming “The Silencer.” The 40-year-old “Flash” owns two legitimate submission victories over Belingon, and one questionable disqualification. On the other hand, Belingon has one comprehensive win over the legend.

Sangiao believes that as long as the two are in the same division, the threat of Belingon to Fernandes’ title reign will always be present.

“Kevin and Bibiano have unfinished business. I just wasn’t convinced the last they fought. Knowing Kevin, he isn’t easy to submit. There were just some mistakes that we made that cost us the fight. But I know we can correct those mistakes,” said Sangiao.

“As long as Bibiano is still the champion at bantamweight, Kevin will always be a threat. He’s going to beat any man put in front of him, and he’s always going to be right there at the top as the number one contender. Kevin Belingon won’t go away, and sooner or later, Bibiano’s going to have to face him again. That’s why I believe a fifth fight could happen.”

Belingon is currently ranked #1 at bantamweight in ONE’s official rankings, so the idea of a fifth showdown between the two isn’t too far-fetched. However, Belingon may have to defeat another top contender before he earns another shot at Fernandes.

Reigning ONE Strawweight World Champion Joshua Pacio knows being champion means everyone is coming for you. In one of ONE Championship’s richest weight classes in terms of talent, Pacio has established himself as a legitimate and dominant champion.

But there are two men who Sangiao believes Pacio should rematch — former strawweight titleholders Yosuke Saruta and Yoshitaka Naito.

“Like Eduard, Joshua is in one of the deepest divisions in ONE Championship. Strawweight is stacked with world-class fighters from top to bottom. The competition is very close. But Joshua is so good, that he can really hang with the best of them. He’s at the top now, and this young man is working very hard to keep his spot,” said Sangiao.

“I think he needs to complete trilogies with Yosuke Saruta and Yoshitaka Naito. A lot of people weren’t convinced with his victories over either, which is why I think rematches would work well in favor of Joshua closing the book on these adversaries. Joshua continues to get better and better by the day. I’m really amazed at his development, and he’s still so young.”

Saruta and Naito are actually scheduled to face each other this September in Tokyo’s “Road to ONE: 3rd TOKYO FIGHT NIGHT” event organized by Abema TV in partnership with ONE. Saruta has expressed his intention of facing Pacio if he can get past Naito. His opponent should be thinking the same.

When Danny Kingad lost to reigning ONE Flyweight World Champion Adriano Moraes in 2017, it set “The King” off on a path of learning. After all, he suffered the first defeat of his professional career, in his first ever title shot, and it’s an experience Kingad says will stick with him for as long as he competes.

Sangiao believes Kingad learned more in that loss than he did in any of his wins. As a result, the Filipino star is developing at an exponential rate, and Sangiao is simply amazed at what he sees.

“Whether Adriano Moraes will remain champion after his fight with Demetrious Johnson, that remains to be seen. But whether or not Moraes is champion, Danny is ready to fight him,” said Sangiao.

“Danny has improved so much in just the span of three years. He’s worked so hard in every facet of his game. There’s no stopping this young man from achieving his goals. Fans will be surprised with just how good Danny is now compared to just a few months ago. He’s used this time off wisely to refocus and rededicate himself to proving himself as one of the best in the world at his weight class.”

Moraes is expected to defend his title next against ONE Flyweight Grand Prix World Champion and 12-time former UFC Flyweight Champion Demetrious “Mighty Mouse” Johnson. Sangiao is confident Kingad would destroy Moraes now, regardless of whether or not the Brazilian remains champion after the Johnson bout.

“I think Danny learned so much from the first fight with Adriano, and now he’s a completely different fighter. He has so much more experience. I know Danny will beat Adriano the next time they meet in the Circle,” Sangiao concluded.