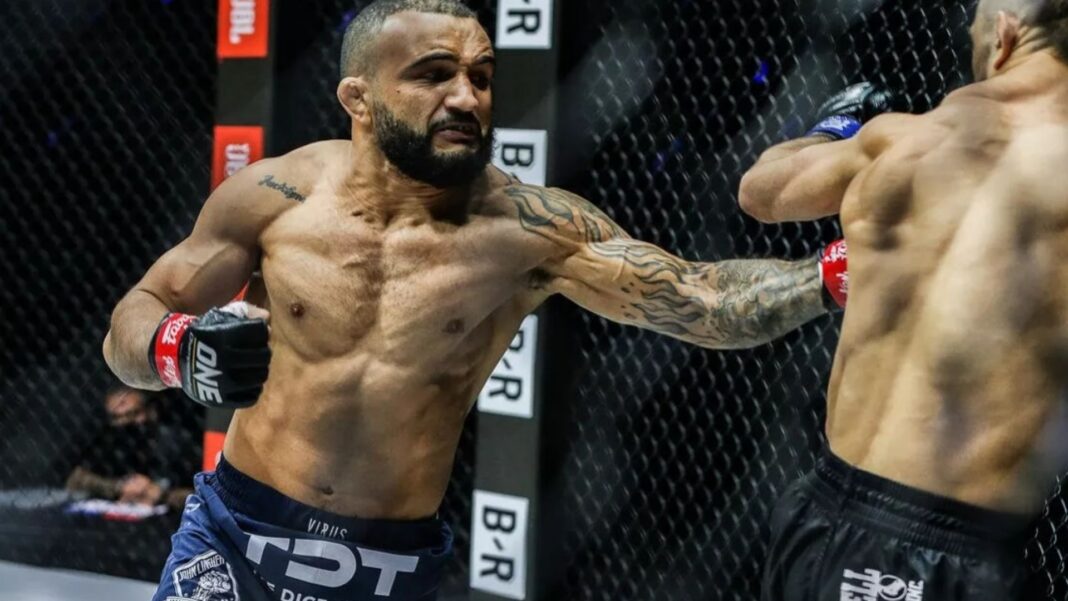 April 22, 2021 – Singapore: ONE Championship™ (ONE), Asia’s largest global sports media property, returned with “ONE on TNT III,” a previously recorded event from the Singapore Indoor Stadium. The action-packed card featured a series of exciting mixed martial arts contests and a “dream match” between striking legends.

In the main event, #1-ranked bantamweight contender John “Hands of Stone” Lineker destroyed a game but overmatched Troy “Pretty Boy” Worthen to win by knockout in the first round.

Lineker came out of the gates firing powerful boxing combinations without caution. He went on to land a torrent of thudding punches to the head and body throughout the fight.

Showing tremendous conditioning and durability, Worthen somehow stayed on his feet despite absorbing Lineker’s best shots. But inside the final minute of the first round, the powerful Brazilian connected with a straight right hand that marked the end for his foe. “Hands of Stone” quickly followed up with another right hand on the ground to seal the finish.

Wakamatsu made his intent known early on, winging wild haymakers from range while McLaren constantly threatened with submissions in intense mat exchanges. As the bout wore on, Wakamatsu began to establish his dominance, tagging McLaren with crisp boxing combinations. In the end, all three judges scored the fight in favor of the Japanese star to win by unanimous decision.

In a highly anticipated rematch, Miao Li Tao authored a fantastic performance against Ryuto “Dragon Boy” Sawada to come away with a unanimous decision after a grueling three-round fight.

And in a ONE Super Series Muay Thai showdown, kickboxing icon Nieky “The Natural” Holzken put together a tremendous performance to stop legendary striker John Wayne “The Gunslinger” Parr in the second round.

Official Results for “ONE on TNT III”

ONE Championship returns with “ONE on TNT IV,” which broadcasts live from the Singapore Indoor Stadium, on Wednesday, April 28 (Thursday, April 29 in Asia). In the main event, reigning ONE Light Heavyweight World Champion Aung La “The Burmese Python” N Sang defends his belt in a trilogy fight against rival Vitaly Bigdash. For more information, visit the “ONE on TNT IV” event page.